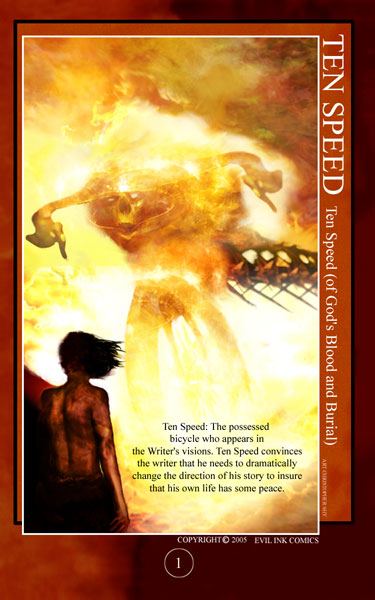 Ten Speed is a bicycle posessed by the dark side of the Writer's mind that haunts his visions, trying to convince him to make drastic changes in the story to insure peace and stability in the Writer's life.

Ten Speed of God's Blood and Burial is a possessed Ten Speed Bicycle. The handle bars are large horns, connected to a monkey-like skull head that serves as the front of the bike. The main body of the bike becomes a large spinal cord attached to the head. The bicycle also becomes much larger, being shown to be about double the height of The Writer.

After the Writer ends up at Newo Ikkin's house in a delusion, he discovers his Ten Speed bicycle has taken on the demonic persona of Ten Speed of God's Blood and Burial.

The demon bicycle confesses that he is the embodiment of The Writer's dark thoughts and ambitions spurred on by Erica Court's unfaithfulness.

After suffering several more delusions and visions, Ten Speed of God's Blood and Burial manages to convince the Writer that the only way to cure his suffering is to kill Ambellina. The Writer accesses The Willing Well where he confronts Claudio Kilgannon and Ambellina, and kills that latter, while revealing to Claudio that he is the Crowing, before returning to the real world, and walking off with his now un-possesed Ten Speed bicycle.

Ten Speed of God's Blood and Burial is a possessed Ten Speed bicycle, and a result of the dark delusions suffered by The Writer taking a physical form.

It can be said that Ten Speed represents the Writer relying on his own feelings of hatred and betrayal so that he does not feel the full brunt of the fact that he may have had a hand in Erica Court's unfaithfulness. This is shown when the Writer confesses that he was "never around" for her to stay faithful to him, to which Ten Speed retaliates by telling him to stop torturing himself and make her suffer.

Ten Speed may also represent The Writer's determination to return to sanity no matter the cost, which can be supported by the fact that he is no longer a present entity after the Writer has killed Ambellina, and thus moved on from his feelings for Erica Court.

Retrieved from "https://coheed.fandom.com/wiki/Ten_Speed?oldid=6258"
Community content is available under CC-BY-SA unless otherwise noted.

Fandom may earn an affiliate commission on sales made from links on this page.

Fandom may earn an affiliate commission on sales made from links on this page.